The waste heat recovery technology has been tested by these five different prototypes with different variations in power electronics, thermal collector contact surfaces, cooling system and the thermoelectric generators to configure the best option for each type of heat source.

Efficiency is one of the main parameters analysed in each project. This parameter shows how much energy is extracted from waste heat.

The efficiency of the prototype depends on the heat source, the heat collector type and the cooling system applied.

The operating cycle of the biomass boiler is 24 hours a day, 7 days a week, and the gas temperature varies from 150 to 300 ºC depending on the fuel used, which can be stumps and/or forest mass. The ambient temperature ranges between 35 and 45 ºC, and there is no cooling water in the installation.

The recovery system that is installed is intrusive: the fins of the WHRU thermal collectors are installed inside the chimney to capture the maximum amount of heat from the gases. Although intrusive, this system does not affect the operation of the boiler, as it does not cause any pressure drop or condensation.

The forced air generated by fans cools the equipment to obtain the maximum temperature difference between the two sides of the Peltier cells.

In this project, the energy recovery system is based on two types of WHRU: 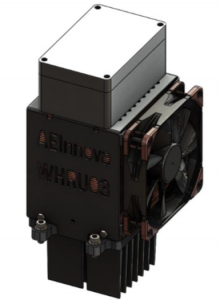 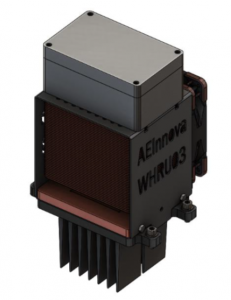 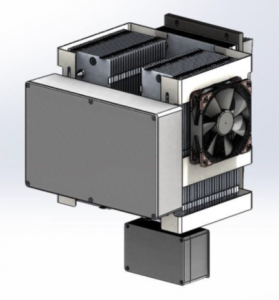 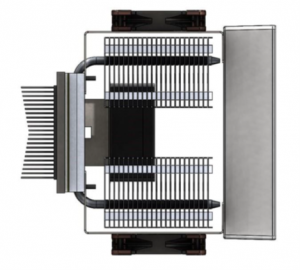 – In contrast to a 280 W solar panel with an efficiency of 17 % and a surface area of 1.63 m2, which represents a power density of about 171 W/m2, the power density obtained with this prototype is about 102 W/m2 with a system efficiency of 1.94 %. Therefore, despite its low efficiency, the heat recovery device is close to the values generated by solar energy using the same surface area.

– The prototype consists of installing two different types of heat recovery units to compare their performance. When analysing the results, the larger the heat sink, the better the performance of the WHRU.

– In addition, in order to generate more energy, it is necessary to capture the maximum amount of heat flow. Therefore, the contact surface between the heat collectors and the hot gases should be as large as possible. Therefore, the installation of the fins in contact with the gas increases the energy generation. However, the length of the fins is limited because a longer length could lead to a pressure drop in the gas flow which could cause emission problems in the installation.

– Prototypes based on a forced air cooling system have proven to be less effective and efficient than others based on a water cooling system.  In addition, a fan has a life cycle of approximately 5 years in regular operation. After this time, the fans need to be replaced. In addition, the fan blades become dirty when the prototype is installed in a polluted industrial environment. This causes a decrease in the performance of the prototype.