It is proposed to install 2 prototypes of Waste heat recovery unit (WHRU) to generate power from the gas coming out of the Yankee cylinder chimney of the tissue dryer (machine #6). 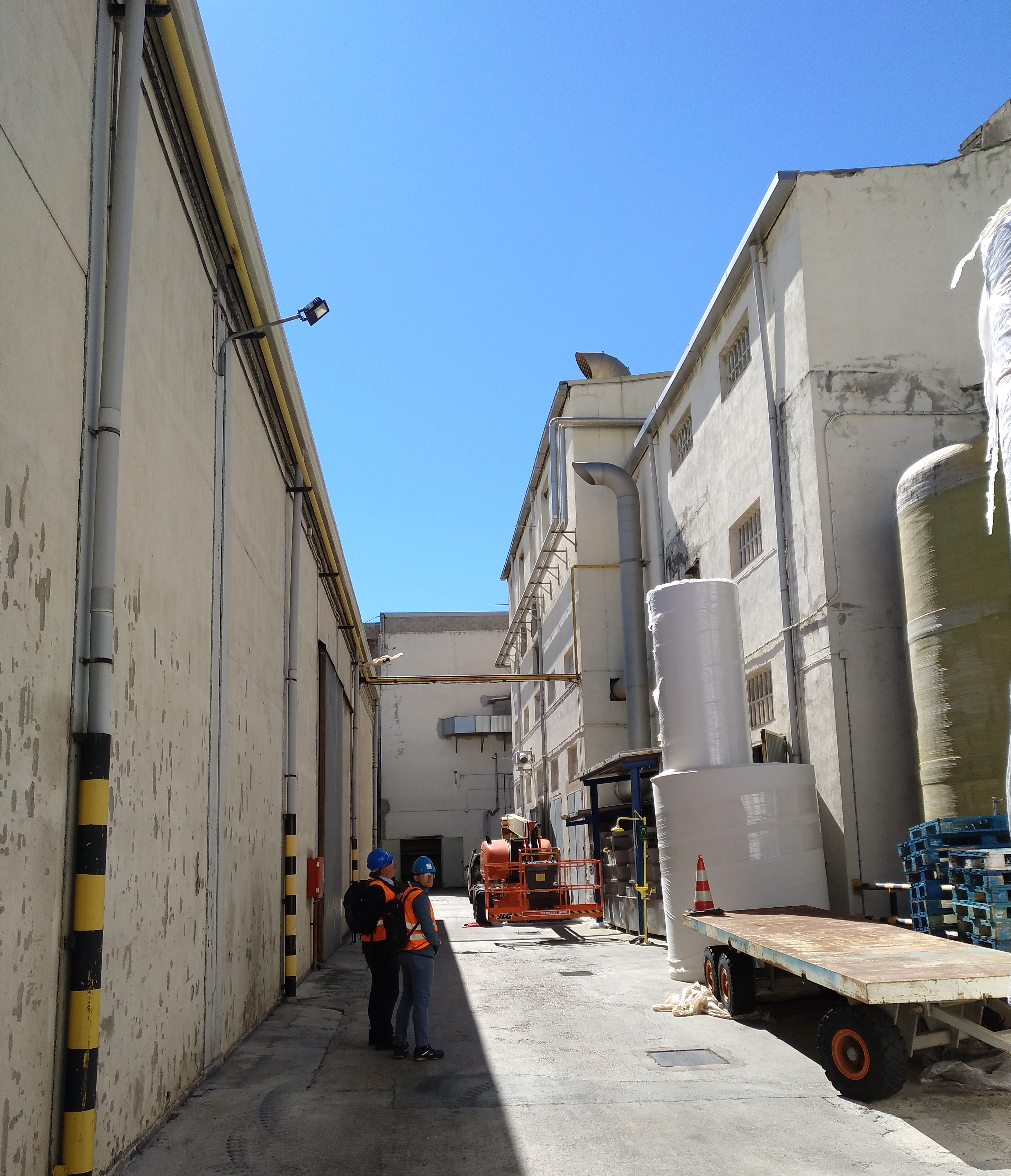 Data to be considered in the design of the unit:

The two WHRU modules will be installed on a flanged decagonal spool at the end of the chimney. 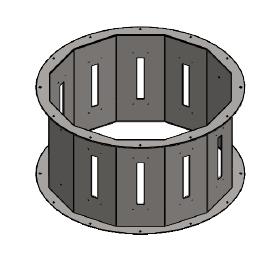 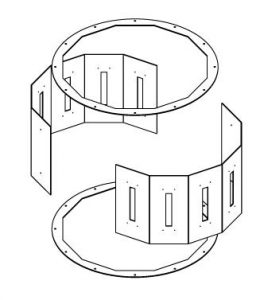 The exhaust fume chimney has an outside diameter of 900 mm with a thickness of 3 mm.

The outlet temperature of the exhaust fumes from the burners has an average of 200 ºC (with peaks of 210 ºC), according to the measurements provided by Gomà-Camps.

For the WHRU cooling, water coming from the cooling towers of the installation at 14-20 ºC may be available.

FEATURES OF THE SYSTEM

A Heat R-System energy recovery system will be installed in a configuration of 2 WHRU modules with 6 40×40 thermoelectric generators, which incorporates Cold Plate technology for the cooling of the modules located in the chimney of the tissue dryer.

The sensors node will be installed inside an independent box that will be installed close to the 2 WHRU modules.
The distribution of the water to the waterblocks will be done by means of a T-fitting with silicone hoses.   The cooling system will be equipped with air bleed valves and anti-return connectors to prevent the presence of air.
WHRU modules will penetrate the conduit with anodized aluminum heatsinks.

The installation of a decagonal tube is chosen to fix two WHRU modules and the sensors node into the 900 mm diameter chimney.

The WHRU module is mainly made up of the following components:

1. 240x40x63 mm aluminum sensor. Black anodized finish to improve corrosion resistance.
2. Frame-Cell Support-Mica Insulator. This component will act as a fixation to the mounting conduit, and at the same time will act as an insulator, since this material has 0.3 W / mK of thermal conductivity and will improve the performance of the equipment. In addition, it will serve to house the cells.
3. Cold Plate. Open liquid cooling system (water) that will be in charge of exerting pressure force on the cells, in addition to cooling the cold side of the cells in order to obtain the maximum thermal differential.
4. Powerbox support. Made of carbon steel. It will act as a support for the power box and will be located on the Cold Plate in order to prevent it from heating up.
5. Powerbox. the PCB will be located inside the box.
6. Thermoelectric generator. Each WHRU module will be equipped with 6 thermoelectric generators with dimensions 40x40x3.6 mm, which can produce up to 6.9 W.

In order for the system to work properly, it is very important that the cooling system meets the following characteristics:

We will place an electrical cabinet with its respective electrical safety: two 16A fuses at the input of the inverter, a 10A magnetothermic switch that cuts the phase and the neutral.

A network synchronized inverter is required, which goes from the 14V output of the system to 230V / 50Hz of the network. There is also a wattmeter to be able to read the power generated remotely.

A 5V power supply is installed for the operation of the sensor nodes and the wattmeter reader, and another 12V source to supply the sensor if the distance between the cabinet and the modules requires it. 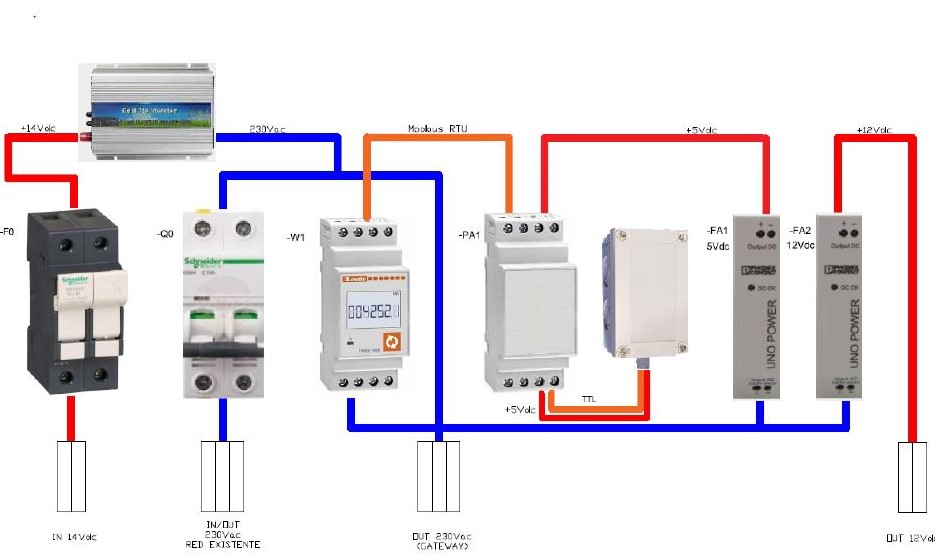 It is required to transform the input voltage from the thermoelectric generator into the required voltage of 14V. This will be done by a set of several CC/CC Boost converters. The control of the CC/CC boost converters operation will be performed by a control printed circuit board.

With an estimated temperature on the hot side of around 150ºC and 25ºC on the cold side, the input resistance of the converter should not exceed 6.7Ω, so the power management system should be made not to exceed a certain value that will be adjusted with tests.

The electronic boards will be located inside power boxes.

Regarding sensorization, two nodes will be installed to monitor the proper operation of the WHRU modules: the first with 4 temperature points (hot face, cold face, gas inlet, gas outlet) and a second one to read the Wattmeter data at the system output. 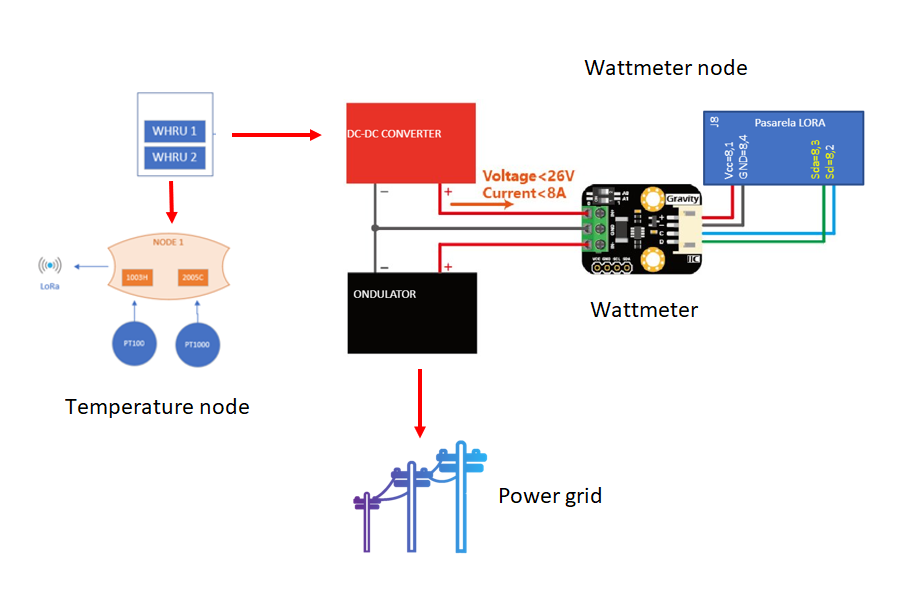 The IoT communication nodes will receive temperature and the generated power data from the sensors. These data will be sent using LoRa communications to the gateway. The restriction of using this type of communication is that it does not allow obtaining data in real-time. Each sample will be sent a certain time. The order of magnitude of time that we must take into account is minutes.
The data will be sent to a Gateway, which will treat it appropriately.