The waste heat recovery technology has been tested by these five different prototypes with different variations in power electronics, thermal collector contact surfaces, cooling system and the thermoelectric generators to configure the best option for each type of heat source.

Efficiency is one of the main parameters analysed in each project. This parameter shows how much energy is extracted from waste heat.

The efficiency of the prototype depends on the heat source, the heat collector type and the cooling system applied.

The energy recovery system (Heat R-System) installed in the industrial plant that Ciments Molins has in St. Vicenç dels Horts (Barcelona) makes use of the waste heat generated in the walls of the rotatory kiln used for firing the clinker and which are close to the burner.

The recovery system obtains heat by conduction and is non-intrusive.

The forced air generated by fans cools the equipment to obtain the maximum temperature difference between the two sides of the Peltier cells.

In this project, the energy recovery system is based on a new type of WHRU: 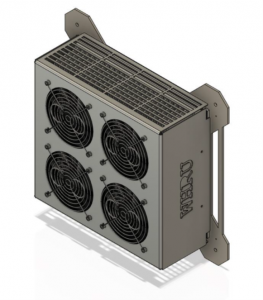 Prototypes based on a forced air-cooling system with a heat collector in contact with a hot surface have been found to be the least effective and efficient.

On the other hand, there is a higher heat transfer due to the higher number of Peltier cells mounted.

Unlike the forced water-cooling system, the forced air-cooling system cannot absorb all the heat. This means that there is no temperature difference between the sides of the Peltier cells and the efficiency is lower.